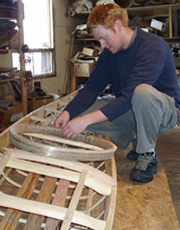 The recipient of the 2007 Pioneers Scholarship honouring Dr. Elmer Harp was Matthew Walls of the University of Calgary.  At the time he was studying the new movement of kayak revitalization in the eastern Arctic and Greenland. The resurfacing of the Greenland kayak, as well as the skills and social status associated with it, is an example of cultural revival. During the 1960s-80s, kayak use in Greenland greatly diminished. Inspired by a museum exhibit of kayaks from the Danish National Museum, several young Greenlanders formed the Qaannat Kattuffiat Society, which has the preservation of traditional kayaking as its sole edict. Qaannat Kattuffiat introduced the Greenland Kayak Competition, which has exploded in popularity, and takes place annually.

The competition has become a national event with Olympic style awards and has created a mechanism by which individuals are revered for their skill and mastery in a sport, which is inextricably linked to a perceived aesthetic of tradition. The Greenland Kayak Competition also supports socio-politics where kayakers achieve status primarily through the best demonstration of performance skills. Additional skills include building frames, sewing skin coverings, and success in hunting. Matthew documented the competition and investigated how it was integral to reviving Greenlandic ties to the past and how individuals achieve status through this process. His personal expertise with building Greenland style kayaks gave him a strong knowledge base to begin this research. His interests were in the methods and process for reviving this tradition, the history behind the kayak, its symbolism in Arctic societies, the reasons for its near disappearance in certain areas and importantly the movement to re-embrace the technology.